On June 16, 2022, the Parliament of Latvia passed, by 61 votes to 19, a bill “On the Prohibition of Display and the Dismantling of Objects Celebrating Soviet and Nazi Regimes on the Territory of the Republic of Latvia,” thus providing a legal basis for the destruction of socialist-era monuments, particularly memorials dedicated to the Red Army that liberated the country from the Nazi-Fascist invader.

This deplorable decision of the Latvian Parliament, which we condemn without appeal, is on exactly the same wavelength as the European Parliament’s disgraceful Resolution of September 19, 2019, in which communism and fascism are equated, urging the legislative bodies of EU member countries to adopt measures to ban communist symbols, propaganda and activity.

While Communists are being persecuted and Red Army veterans are banned from displaying their well-deserved military decorations, in reality neo-Nazi organizations are not only tolerated, but even supported by the Latvian bourgeois regime, and free to display Nazi symbols and hold demonstrations and conferences. Nazi collaborators and veterans of the Latvian Waffen-SS Legion, who somehow escaped the Soviet courts and the just punishment for their crimes, are being passed off as fighters for the independence of the country. They have been rehabilitated and, under a 1995 law, receive a lavish pensions and a range of benefits, which are denied to Soviet Army veterans, who are often deprived of civil and political rights as well. It should not be forgotten that, under Latvian law, individuals of different nationalities, from former Soviet republics, do not enjoy the status of citizens and related rights.

With this disgraceful operation, the Latvian bourgeois regime, one of the most reactionary and anti-popular in Europe, seeks to erase the collective historical memory, especially that of young proletarians, in order to rewrite history by falsifying it, denigrating socialism and the role that the Soviet Union, led by the Bolshevik Communist Party of Lenin and Stalin, played in liberating the peoples from the Nazi-fascist monster. In the face of bankrupt capitalism, which condemns the Latvian people to conditions of increasing misery, low wages, lack of essential services, unemployment and emigration, with 11% of the population at risk of absolute poverty, bourgeois power wants to force people to forget the great achievements that Soviet socialism accomplished, starting with a decent life for workers and a stable peace among peoples. The living conditions of the Latvian proletariat are set to worsen further as a result of the firm support by the bourgeois government, which is at the behest of Washington and Brussels, of NATO’s war plans in support of the Ukrainian regime.

Poverty, ethnic discrimination, repression and war: these are the “democratic values” of the European Union and NATO which the Latvian bourgeois government shares!

The Communist Front (Italy) firmly condemns the anti-people and anti-communist policies of the Latvian government and parliament and expresses its solidarity with the anti-fascists of that country, first and foremost to the comrades of the Socialist Party of Latvia, who are engaged in a strenuous struggle for the restoration of democratic rights, which are now denied. Let us strengthen our common struggle against the imperialist war, for the exit of our countries from NATO and the EU, for socialism and communism!

FASCISM WILL NOT PREVAIL! REPRESSION WILL NOT STOP US!
PROLETARIANS OF ALL COUNTRIES, UNITE! 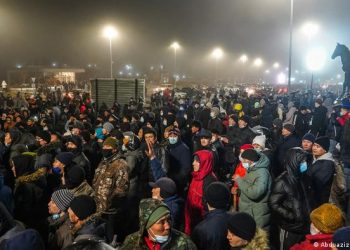 Solidarity with the struggle of the workers and communists of Kazakhstan!