On behalf of all militants of the Communist Front (Italy) we send you a warm and fraternal greeting on the occasion of your 7th Congress. We would have liked to be with you in person on this important occasion, but the contingent commitments that the class struggle in our country imposes on us have not allowed us to realize our desire.

All of us are facing a moment of particular difficulty for the Communists and for the class, whose interests we strive to represent, for the proletariat.

The sharpening of the incurable contradictions of the capitalist mode of production and inter-imperialist competition, which find their maximum expression in the imperialist war currently underway in Ukraine, threatens to drag the world into a direct conflict between nuclear powers which would have catastrophic consequences for humanity.

The responsibility is clear of the US-EU-NATO imperialist bloc for the escalation that led to the outbreak of war. The thirty-year expansion of the borders of the Atlantic Alliance towards the east with the intention of encircling Russia, the open and subversive interference in the internal affairs of Ukraine which provoked the coup of 2014, the support and arming of the reactionary Kiev regime and of the Nazi and ultra-nationalist gangs as a battering ram against Russia are facts that we denounce and condemn with determination.

This is fully part of the aggressive nature of an imperialist bloc which is losing its world hegemony, but it should not make us forget that on the other side of the fence stands another bloc, equally imperialist, which, under the slogan of multipolarity, actually demands a new division of the world, in which the bourgeoisie and the Russian monopolies have a role corresponding to their economic and military weight.

This is the real stake of this war: either the survival of the current imperialist world order, based on the hegemony of the USA and the supremacy of the dollar and the debtor countries, or a new order, equally imperialist, whose rudder is held by those countries towards which the economic center of gravity of the production of world wealth has now shifted.

It is clear that from this war, due to the class nature of the belligerent parties and the goals they pursue, the proletariat in general, without national distinction, can only expect mourning, suffering and misery. It should therefore be equally clear that the communists, who should be the revolutionary vanguard of the proletariat, should not support any of the warring parties, as there is no commonality of interests between the exploited and the exploiters.

Taking advantage of inter-imperialist contradictions for the purposes of the proletarian revolution does not mean following the politics of one’s national bourgeoisie and supporting it in its military adventures. On the contrary, it means taking advantage of its weakness and actively working for its political and military defeat, turning arms against our exploiters and their state instead of our class brothers, transforming the imperialist war into a revolutionary civil war.

It is in this spirit that our Party operates, committed within the limits of its concrete possibilities to countering the plans of the Italian monopoly bourgeoisie and the involvement of our country in the imperialist war underway in Ukraine. The ongoing war between the US-EU-NATO imperialist bloc and Russia, the support in arms and finances to the odious Ukrainian reactionary regime has already cost too much to the proletariat of all parties involved in the conflict. In addition to the human losses and destruction directly caused by military operations, there are the heavy consequences that the workers are forced to suffer due to the worsening of the structural crisis of capitalism, caused by the war and the senseless sanctioning policy. Inflation accompanied by economic stagnation and, soon, by full-blown recession, promises a tragic scenario for the proletarians, their further, drastic impoverishment, if the communists fail to take matters into their own hands and overturn the existing balance of power .

Today our slogan “Proletarians all over the world, unite!” is as timely as never before, faced with the imperialist war that pits the proletarians against each other using the subtle weapon of nationalism.

It is with this commitment to reconstructing the class unity of the exploited at an international level that we oppose the imperialist war, demanding the cessation of arms shipments to Ukraine, the revocation of the insane anti-Russian sanctions, Italy’s exit from imperialists and warmongers organizations like NATO and the EU. We are also aware that this is still not enough, since any diplomatic solution to the ongoing conflict, any ceasefire, within the framework of capitalism would only be temporary and unjust, pending a future resumption of hostilities on the basis of the same contradictions and incurable antagonisms typical of capitalism in its imperialist stage. For this reason, the anti-imperialist struggle for a just and stable peace can only be a struggle for the definitive overthrow of capitalism, the establishment of the proletarian dictatorship and the start of the construction of socialism-communism.

This is the way we have chosen and, we are sure, it is the way along which we march side by side with the Communist Party of Mexico.

Therefore, dear comrades, we wish you fruitful congress works for achieving new and ever more significant successes in the revolutionary struggle for the victory of the Mexican and world proletariat, for the affirmation of socialism-communism!

PROLETARIANS ALL OVER THE WORLD, UNITE! 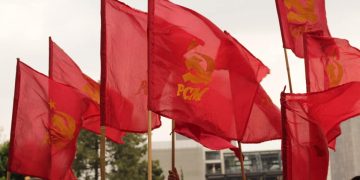